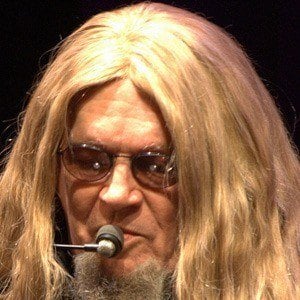 Country singer who released singles including "Mona Lisa Lost her Smile" and "The Ride." He released an explicit album called Nothing Sacred and Underground Album and was known for his unpredictable style.

He spent many years in corrections, but was inspired to write and perform music by Screamin' Jay Hawkins. He released his debut album Penitentiary Blues in 1968.

He was featured in the documentary film Heartworn Highways in 1975, directed by James Szalapski.

He was born in Akron, Ohio. He had five children, four daughters and a son.

He wrote a song for Kid Rock titled "Single Father" in 2003.

David Allan Coe Is A Member Of