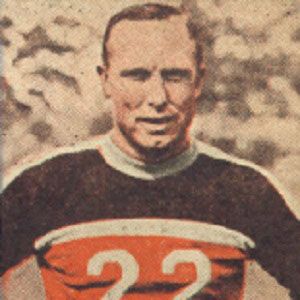 Legendary New York Giant; he set a franchise record with a 91-yard run from scrimmage against the Packers that remained unbroken for 75 years.

He played mostly basketball in college for Carnegie Tech, in Pittsburgh, but did fill in during one game against Knute Rockne's famed Four Horsemen.

He was the Giants' points leader in 1931, and set another NFL record with the team in 1933, for the most receiving yards in a single game (114 against the Philadelphia Eagles).

He grew up in Belle Plaine, Iowa.

Tiki Barber broke his longest run from scrimmage record on the last day of the year in 2005.

Hap Moran Is A Member Of