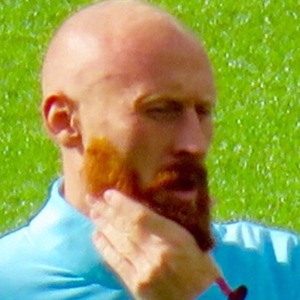 Welsh center back who is famous for his career for England's Premier League squad West Ham United. He signed with the squad as their primary defending facilitator in 2012 for his second tenure after playing for them between 2005-2009.

He made his professional club debut in 2000 for Cardiff City.

He made 51 international appearances as part of Wale's national senior team between 2004-2016 before announcing his retirement from the team in 2017. He went viral in April 2018 after sitting with fans during a Premier League match while sidelined with injury.

His wife's name is Samantha. They have three children, two sons named Dylan and Jesse and a daughter named Myla.

He and Mark Noble have played as teammates for West Ham United.

James Collins Is A Member Of