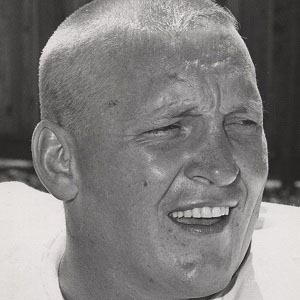 Hall of Fame center who played with the Oakland Raiders during the entire 10-year existence of the American Football League, becoming an All-AFL selection in all 10 of those years. He won the AFL Championship with the team in 1967 and was later named as the starting center on the league's All-Time Team.

He played under head coach Win Brockmeyer at Wausau High School. He later played center as well as linebacker at the University of Miami.

As a result of injuries sustained during his playing career, he has endured more than 70 surgeries, including nearly 30 knee operations. His right leg was eventually amputated in 2007.

He married a woman named Sally and has a daughter named Jennifer.

He and future head coach Tom Flores were teammates on the Raiders' inaugural roster in 1960.

Jim Otto Is A Member Of