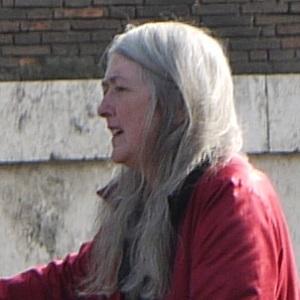 Known for her blog "A Don's Life" and for such academic publications as The Roman Triumph and Laughter in Ancient Rome, this University of Cambridge professor and Classics scholar also edited the Times Literary Supplement.

She received her bachelor's, master's and doctoral degrees from Newnham College, Cambridge, and subsequently taught in the Classics department at King's College London.

She received the Wolfson History Prize for her 2008 publication Pompeii: The Life of a Roman Town.

Born Winifred Mary Beard, she grew up in Shropshire, England, as the only child of architect Roy Whitbread Beard and literary enthusiast and school administrator Joyce Emily Beard.

She and her contemporary, John Hare, both became famous British classicists.

Mary Beard Is A Member Of