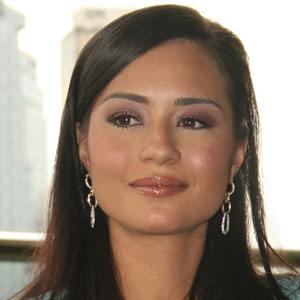 Malaysian actress who appeared in such films as Pontianak Harum Sundal Malam and Waris Jari Hantu. She won several awards for her performances, including 2013's 25th Malaysian FIlm Festival award for Best Actress in a Leading Role for the film Ombak Rindu.

She began her career in 2000 as a host for the Malaysian television show, Wavelength. Soon thereafter, she starred in Sri Dewi Malam, her first feature film.

She released her first vocal music album, Erti Cinta (Definition of Love), in 2002.

She was born in Germany to a Malaysian mother and a German father, and she and her two siblings grew up mostly in Indonesia. She was briefly married to a teacher named Steven David Shorthose.

She and soccer player Steven Gerrard both became celebrity ambassadors for the Celcom telecommunications company.

Maya Karin Is A Member Of