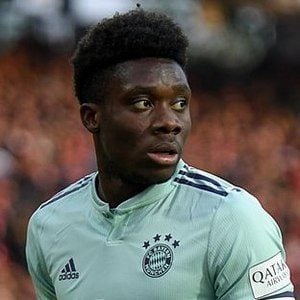 Left-back who began playing with the Vancouver Whitecaps FC of the MLS in 2016. He was part of Canada's U-17 and U-20 youth national teams, and joined the main national team in 2017. Bayern Munich signed him to join their club in January of 2019.

He was the first player born in the 2000s to play in an MLS match. He became the youngest player to appear for the Canadian men's national team.

He was born in a refugee camp in the Gomoa East District of Ghana to Liberian parents. He moved to Canada at the age of five with his family as refugees. He began dating fellow soccer player Jordyn Huitema, and together they ran the Jordyn & Alphonso YouTube channel. They broke up in May 2022.

When he made his MLS debut in July of 2016, he became the second youngest player to play in the league behind Freddy Adu.

Alphonso Davies Is A Member Of