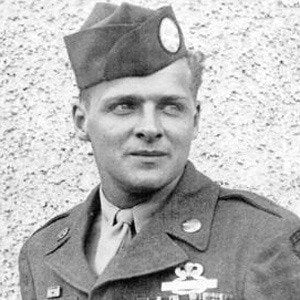 Paratrooper who was a member of Easy Company, the subject of the miniseries Band of Brothers, and a recipient of the Purple Heart and Bronze Star.

He originally tried enlisting in the marines, but was rejected. After being drafted, he volunteered to be a paratrooper.

After parachuting into France, he participated in a battle that took out four German artillery battery.

He told the story which led to the screenplay for the Tom Hanks' film Saving Private Ryan.

Donald Malarkey Is A Member Of