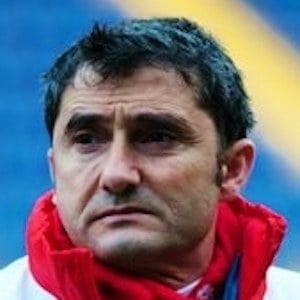 Soccer coach and former forward who has gained massive fame as the head manager for FC Barcelona. He was previously named La Liga's Coach of the Year following the 2015-2016 campaign as Athletic Bilbao's manager, and signed to manage Barcelona in 2017.

As a prolific forward, he contributed to the Barcelona squad that won the UEFA Winner's Cup in 1989. He began his coaching career as an assistant for Athletic Bilbao in 2001.

He was originally born and raised in the tiny town of Viandar de la Vera, Spain.

Ernesto Valverde Is A Member Of