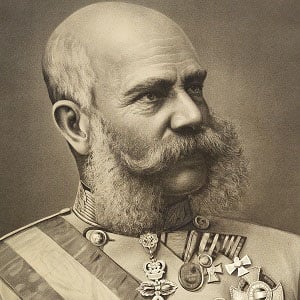 Austrian political leader and royal. He served as Emperor of Austria and Apostolic King of Hungary from 1848 to 1916. From 1850 to 1866, he also served as President of the German Confederation.

He joined the Austrian Army at the age of thirteen. Soon thereafter, he served under the command of Field Marshal Radetzky in an 1848 Italian campaign.

He was the object of an attempted assassination by Janos Libenyi, a Hungarian-born nationalist.

He was the son of Archduke Franz Karl of Austria and Princess Sophie of Bavaria. His marriage to Empress Elisabeth of Austria produced three daughters and one son.

He formed one third of the League of Three Emperors, a group that also included Russia's Tsar Alexander II and Germany's Kaiser Wilhelm I.

Franz Joseph I Is A Member Of