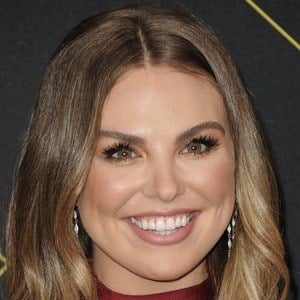 Reality star and pageant contestant who was crowned Miss Alabama USA in 2018. She became a contestant on season 23 of The Bachelor and went on to become The Bachelorette in 2019. Also in 2019, she won the 28th season of Dancing with the Stars alongside her partner Alan Bersten.

In 2013 she graduated from the University of Alabama with a degree in communications.

She and fellow Bachelor castmate Caelynn Miller-Keyes were roommates while they were competing in Miss USA.

She has a brother named Patrick. She got engaged to Jed Wyatt during her run as The Bachelorette, but the two broke things off. She then went on to date another contestant on The Bachelorette, Tyler Cameron. Her boyfriend Adam Woolard did her makeup in an April 2021 YouTube video.

Hannah Brown Is A Member Of

Dancing with the Stars
The Bachelorette
28 Year Olds
Reality Stars