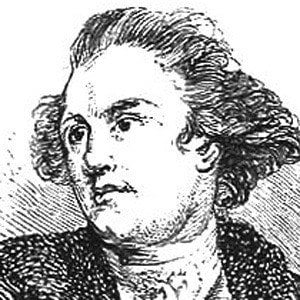 An eighteenth-century Scottish author and poet, he is known mostly for the scandal of authenticity surrounding his "translation" of Ossian's poetry. He also authored a historical work with the lengthy title of: "Original Papers, containing the Secret History of Great Britain from the Restoration to the Accession of the House of Hanover."

He studied at both King's College, Aberdeen and Marischal College and wrote poetry during his years as a student. A collection of his poems, The Highlander, was published in 1758.

He was appointed secretary to the Governor of colonial Florida in 1764 and later became a member of the British Parliament.

He was raised in Invernessshire, Scotland, and he later bought an estate in the region and lived there until his death. He passed away at the age of fifty-nine.

His Ossianic Poems, although likely inauthentic (modern verse rather than ancient poems translated from the Gaelic), were greatly admired by Johann Von Goethe.

James MacPherson Is A Member Of