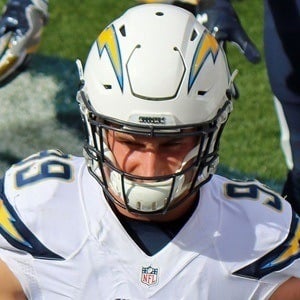 Defensive end who won the inaugural College Football Playoff National Championship as a member of the Ohio State Buckeyes in 2015. He was selected third overall in the 2016 NFL Draft by the San Diego Chargers. He was named AP Defensive Rookie of the Year in 2016-17.

He was ranked as the fourth-best defensive end in his class by Rivals coming out of St. Thomas Aquinas High School in Fort Lauderdale, Florida. He joined the Buckeyes in 2013.

He won the Smith-Brown Defensive Lineman of the Year award as the best defensive lineman in the Big Ten Conference in 2014. The following year, he was named a Unanimous All-American.

His father, John, was a first round draft pick of the Miami Dolphins in 1987. His uncle Eric played football at Ohio State. His brother Nick also became a player in the NFL.

He won the 2015 CFP National Championship with the help of the game's Offensive MVP, running back Ezekiel Elliott.

Joey Bosa Is A Member Of