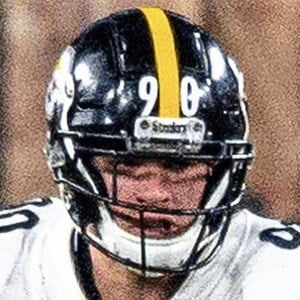 Outside linebacker who was selected 30th overall in the 2017 NFL Draft by the Pittsburgh Steelers. He was a First Team All-Big Ten selection and a Second-team All-American in 2016 as a member of the University of Wisconsin Badgers. In 2021-22, he won the NFL Defensive Player of the Year award after tying an NFL record by compiling 22.5 sacks.

In high school, he was named honorable mention all-state and a first-team all-conference quarterback, linebacker and punter.

He was joined on the Badgers football team by his older brother, fullback Derek Watt. His oldest brother JJ Watt became one of the top defensive lineman in the NFL. His wife Dani Rhodes played on the University of Wisconsin women's soccer team; the couple got married in 2022.

He was a teammate of Heisman hopeful Melvin Gordon during the 2014 season that he was forced to miss due to injury.

TJ Watt Is A Member Of