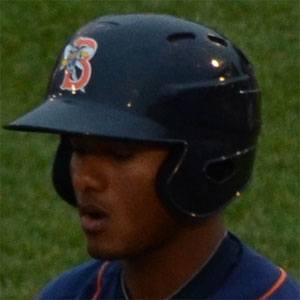 Dominican baseball player known for his time with teams like the New York Mets and Miami Marlins. He rose through the minor leagues with the Mets farm system before making his major league debut in 2012.

He was suspended for 50 games in 2013 for his involvement in the Biogenesis doping scandal.

His mother is Maria Guzman.

Jordany Valdespin Is A Member Of