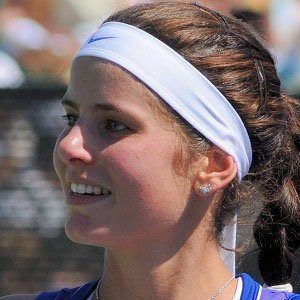 German tennis player who reached her peak WTA singles ranking at 15 in March 2012. Some of her biggest accomplishments as a pro include a singles victory at the 2011 Porsche Tennis Grand Prix and finishing as a runner-up at the 2014 French open with doubles partner Nenad Zimonjic.

She started playing tennis at age 5 and grew up idolizing Martina Hingis. She attended the Klaus-Groth-Schule and Theodor-Mommsen-Schule in her hometown of Bad Oldesloe from 1995 to 2005.

She pulled off an upset over Caroline Wozniacki in straight sets in the second round of the 2015 French Open.

Her parents are Klaus and Inge Gorges. She has a half-sister named Maike.

She defeated Andrea Hlavackova on her way to the final of the 2014 Coupe Banque Nationale.

Julia Gorges Is A Member Of