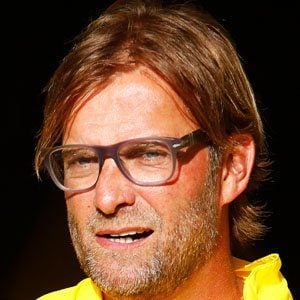 German soccer manager and former player best known as the manager for Liverpool, 1. FSV Mainz 05 and Borussia Dortmund. As a player, he was a striker and defender for 1. FSV Mainz 05 for his entire career from 1989 to 2001.

He was born in Stuttgart and began his youth career with SV Glatten in 1975.

He was named German Football Manager of the Year two straight years in 2011 and 2012.

He was married to Sabine Klopp until 2001 and married Ulla Sandrock in 2005. He has two sons, one of whom played for Borussia Dortmund II.

He succeeded Thomas Doll as the manager of Borussia Dortmund in 2008.

Jurgen Klopp Is A Member Of