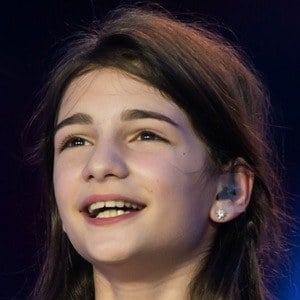 Pop, R&B and jazz singer who won the Junior Eurovision Song Contest in 2016 with the song "Mzeo."

She began performing when she was 4 years old. She studied at both the Bzikebistudio in Georgia and Evgeni Mikeladze State Central Music School.

She enrolled at Tomlinson Middle School in Fairfield, Connecticut and Broadway Method Academy upon moving to the United States.

She was born in Tbilisi, Georgia, and would take residence in Fairfield, Connecticut in the United States.

She won the Junior Eurovision Song Contest a year prior to Polina Bogusevich winning for her country of Russia.

Mariam Mamadashvili Is A Member Of