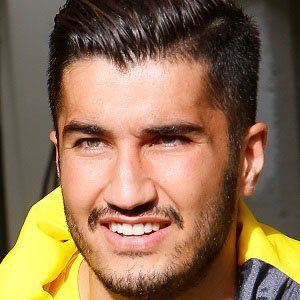 Midfielder who joined Real Madrid in 2011 and became part of the Turkish national team in 2005. He set a record by becoming the youngest player to score a goal in the Bundesliga at 16 years and 334 days.

He began his career with Borussia Dortmund, starting in their youth system and working his way up to the senior team.

During his time with Real Madrid, he was sent on loan to LIverpool in 2012 and to his former team Borussian Dortmund in 2013.

He and his wife Tugba had a son named Omer together.

He joined Cristiano Ronaldo on Real Madrid in 2011.

Nuri Sahin Is A Member Of