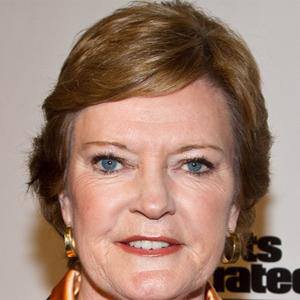 Compiled the most wins in NCAA basketball history and coached Tennessee to eight women's national college basketball titles between 1974 and 2012.

Her family moved so she could play high school basketball.

A diagnosis of Alzheimer's disease forced her to retire in 2012.

She had three older brothers named Tommy, Charles, and Kenneth. She was married to R.B. Summitt from 1980 to 2008 and they had a son named Tyler together.

She is to women's college basketball as John Wooden is to men's.

Pat Summitt Is A Member Of