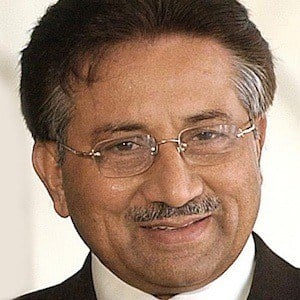 Four-star general and a politician who seized power in Pakistan through a military coup d'état in 1999. He ran Pakistan as its10th President from 2001 to 2008.

He received the Imtiazi Sanad medal for gallantry and for his bravery during the Second Kashmir War.

He helped negotiate peace during the Afghan civil war.

He married his wife Sehba on 28 December 1968 and they had two children together.

In 2013 he was indicted by a Pakistani Court in the assassination of Benazir Bhutto.

Pervez Musharraf Is A Member Of