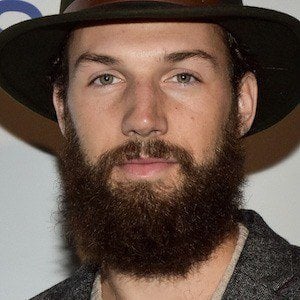 Model and reality star known for competing on The CW's America's Next Top Model during Cycle 20, the first cycle that allowed men and women to compete. He narrowly missed the finale as he was eliminated just before the top eight. He is represented by Ford Models New York and has walked at New York Fashion Week and been in various print campaigns.

He began attending Massachusetts College of Liberal Arts and played baseball there before dropping out and moving to Plymouth, Massachusetts, to work for a real estate staging company.

He is known for his overgrown and wooly mammoth look. While on America's Next Top Model, Tyra Banks supposedly told him to grow out all of his natural hair, which adds to his signature look now.

He was born and raised in Massachusetts. His mother was worried about his modeling career when he first started out because she didn't like the idea of mysterious people photographing him.

While on America's Next Top Model, the reality show made it seem as though he had a close relationship budding with Jiana Davis. He vehemently refuted this in off-screen interviews.

Phil Sullivan Is A Member Of