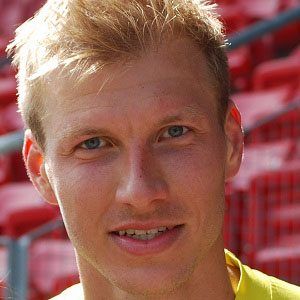 Estonian defender who has captured league titles as a member of FC Flora Tallinn and AZ Alkmaar. In 2016, he joined Liverpool. He was first made a member of the Estonian national team in 2003 and was named the team's captain in 2012.

He debut with FC Elva's first team in 2001, when he was 15 years old. After one season with the club, he left to join Viljandi Tulevik.

He was named Estonian Footballer of the Year in 2012 while playing for AZ Alkmaar.

He married Lili Orel in June 2011 and welcomed his first child, a son named Romer, in August 2012. His father is former professional soccer player Dzintar Klavan.

He has been teammates with Dutch player Paul Verhaegh at FC Augsburg.

Ragnar Klavan Is A Member Of