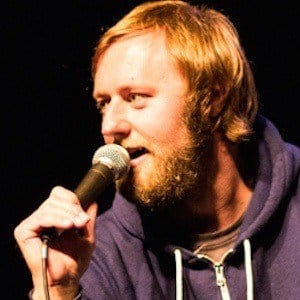 Stand-up comedian who has performed live on shows like Conan, The Eric Andre Show and Late Night with Jimmy Fallon. His debut comedy album, Dilation, was released on Stand Up! Records in 2011.

He played a variety of sports while growing up in Greenville, South Carolina, including soccer, which he played for four years at the University of South Carolina Upstate. He got his start in stand-up comedy performing at open mics in Spartanburg, South Carolina.

In 2013, he performed a show exclusively for Jack White's Third Man Records label. The show was pressed to vinyl and not released digitally.

He married a woman named Jordan and has a daughter.

He has opened for some of the biggest names in comedy, including Louis CK.

Rory Scovel Is A Member Of