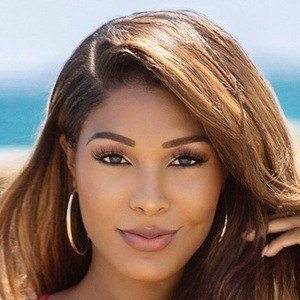 Model who has been seen in publications like Playboy and Elle and made appearances in shows like Project Runway and Tosh.0. She also was the runner-up in the 2014 Miss New York USA pageant.

She first began modeling and appearing in ad campaigns in her late teens. She also cultivated her early career while studying mechanical engineering at City College.

In 2016, she appeared in the documentary Voyage of Time: Life's Journey narrated by Cate Blanchett.

Born in Washington, D.C., she was raised in Toledo, Ohio. She is of Guyanese descent.

Known for her frequent appearances in music videos, she has appeared in videos by artists like Trey Songz, Chris Brown, Taio Cruz, and Mary J. Blige.

Runa Lucienne Is A Member Of