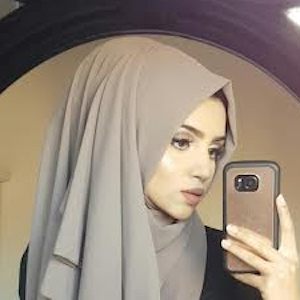 Makeup and fashion enthusiast who became most well known for her Instagram account saimascorner where she posts modest fashion looks and hijab tutorials to help empower Muslim women. She launched her own clothing line called SaimasCorner.

She earned a bachelor's degree in sociology with a minor in psychology and anthropology from the University of Toronto.

She works full-time at a construction marketing data company and also works as a fashion blogger. She has more than 480,000 followers on Instagram. She also launched a YouTube channel called SaimasCorner.

Her parents are originally from India. She was born and raised in Canada. She has been featured on her sister's YouTube channel, Fictionally Flawless. She also has an older brother and a younger brother.

She and Ruba Zai have both published "Hijab Tutorial" videos to their respective YouTube channels.

Saima Khan Is A Member Of