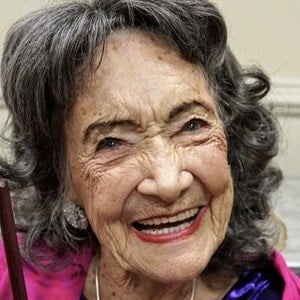 Yoga teacher who was recognized by the Guinness Book of World Records as the world's oldest at age 93. She was also a former couture model and actress who appeared in such films as Show Boat (1951) and The Last Time I Saw Paris (1954).

She grew up accompanying her uncle on trips around Asia. She spent much of her early years in Rhône River Valley in Southern France.

She was a French Resistance fighter during World War II and helped people flee from the Nazis.

She was raised by her aunt and uncle after her mother died giving birth to her. She was married to Bill Lynch from 1962 until his death in 1982.

She was a civil rights activist who marched with Mahatma Gandhi multiple times.

Tao Porchon-Lynch Is A Member Of