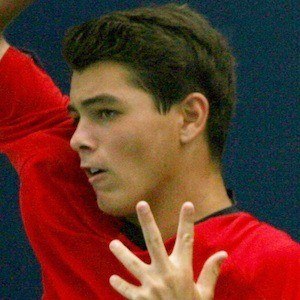 Professional tennis player known for being the fastest American to appear in an ATP final, reaching the final of the Memphis Open in his third career event.

He was an accomplished amateur player, reaching the final of the junior French Open and winning the junior US Open.

He broke into the top 100 rankings for the first time in February of 2016. He was the 2015 ITF Junior World Championship.

His parents, Kathy and Guy, were both professional tennis players.

He was the first American to be ITF Junior World Championship since Donald Young, who'd received the honors a decade earlier.

Taylor Fritz Is A Member Of