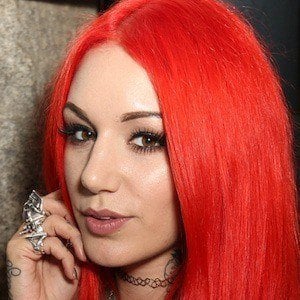 Model best recognized for her trademark red hair and intricate tattoos. She has specialized in implied nude photoshoots and graced the covers of tattoo magazines like Skin Art, Skin Ink, and Inked Girls magazine.

After completing her schooling, she began modeling in 2008 as a method to boost her confidence. It eventually became both a passion and career.

She helped to found the pyrotechnic performance group Pyrohex in 2013. The group has toured and performed around the United Kingdom.

Her boyfriend, Durb Morrison, is a tattoo artist and writer for tattoo magazines.

Much like Leah Jung, she is a model who gained popularity for her extensive tattoos.

Cervena Fox Is A Member Of