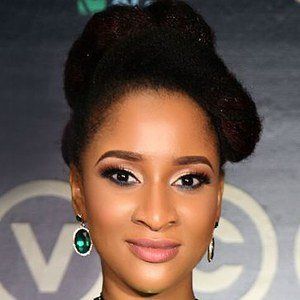 2016 Africa Magic Viewers Choice Award-winner in the category of Best Actress in a Drama for her role in the 2015 film Falling. She made her feature film debut in 2014's Knocking On Heaven's Door and has starred in other features called A Soldier's Story, The Arbitration, The Wedding Party and Ayamma: Music In The Desert.

She joined a school drama club when she was just 7 years old. She earned a diploma in physical theater, musical theater and performing arts from The City College in Coventry, England. She then obtained a Bachelor's in drama and performance at the University of Wolverhampton.

She took to the stage for a number of productions between 2004 and 2014. She later starred in the MTV series Shuga.

She was born Tolulope Adesua Etomi in Owerri, Imo, Nigeria to a father of Esan descent and mother of Yoruba descent. They worked as a soldier and engineer, respectively. She is the youngest of three siblings. She became engaged to Banky W. in 2017.

She starred alongside Desmond Elliot in the romantic drama film Falling.

Adesua Etomi Is A Member Of