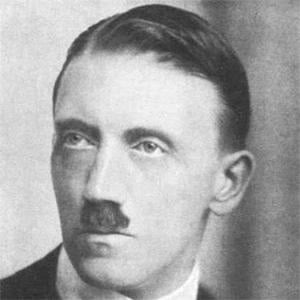 Dictator and leader of the Third Reich in Nazi Germany. A notorious criminal, he spurred World War II and brought about the Holocaust.

As a child, he sang in his church's choir and planned on entering the priesthood.

He was born in Austria, and he fought in the trenches of World War I.

He married his longtime girlfriend, Eva Braun, a day before they both committed suicide.

In 1939, Franklin D. Roosevelt wrote him a letter requesting that he agree to not attack certain countries for ten years.

Adolf Hitler Is A Member Of