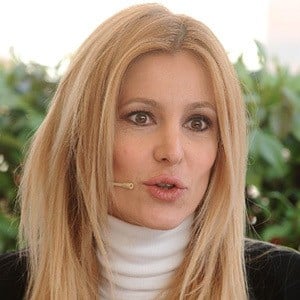 Italian television host, present, model, and actress. She is best known for her work on the shows Mezzogiorno in famiglia ad well as I Fatti Vostri. She is also known for appearing in the feature films My Father Jack and Teen Star Academy.

After finishing high school in Rome, she started working as a professional model in 1990. In 1992 she started her television career as the showgirl for the program Scommettiamo che.

She graduated in 2012 with her degree in Literature from the Universita degli Studi eCampus.

She married Chicco Cangini in 2000 and later Roberto Parli in July of 2008.

She worked alongside fellow TV host and personality Fabrizio Frizzi on the show Scommettiamo Che.

Adriana Volpe Is A Member Of