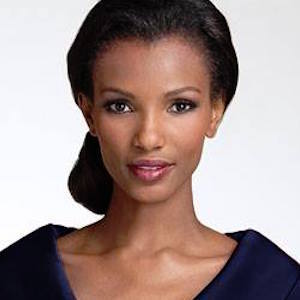 Model and pageant queen who rose to fame in 2001 as the Most Beautiful Girl in Nigeria. She later competed in Miss Universe and became the first native African to win Miss World. She has since modeled for numerous prestigious designers, brands, and magazines from Oscar de la Renta to Cosmopolitan.

After a failed audition for Face of Africa, she attended University of Port Harcourt where she studied mathematics and computer science.

She was invited by Naomi Campbell to participate in a charity fashion show in Barcelona called Frock 'n' Roll.

She was born in Abonnema, Nigeria as one of eight children. Her mother died of breast cancer when she was twelve.

After competing in Miss Universe, she negotiating a modeling contract with Donald Trump's model management.

Agbani Darego Is A Member Of