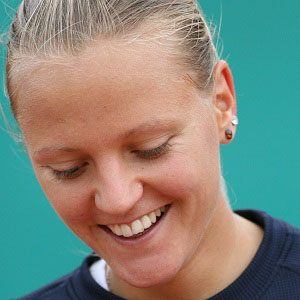 Hungarian tennis player who was named the WTA Newcomer of the Year in 2007 and retired due to injury in 2013. She is a 2-time winner of the GDF Suez Grand Prix and reached a peak world ranking of 13th in April 2008.

She grew up in Soltvadkert, Hungary and began playing tennis at age 6. She made her WTA debut in July 2004.

She was voted the Hungarian Sportswoman of The Year in 2007.

Her younger sister Blanka Szavay is also a tennis player.

She won the Girls' Doubles Championship at the 2005 French Open alongside partner Victoria Azarenka.

Agnes Szavay Is A Member Of