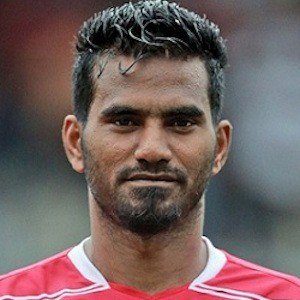 Otherwise known as Dhagandey, he is a soccer player best known for playing with the Polis Di-Raja Malaysia Football Association.

He played soccer throughout his school years and, in 2001, was invited to Club Valencia where he began his professional career.

In 2009, he became captain of the Maldives National Football Team.

He was born in Male, Maldives where he lived with his mother and brother Ahmed.

Both he and Lionel Messi have scored 5 goals in a single continental tournament.

Ali Ashfaq Is A Member Of