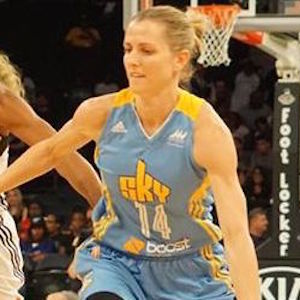 Guard who was picked in the second round of the 2008 WNBA Draft out of DePaul University by the Phoenix Mercury. After helping the Chicago Sky reach the WNBA Finals for the first time in franchise history in 2014, she was named Sixth Woman of the Year. She would go on to win the award again in 2015.

She was an WBCA All-American at Joliet Chatolic Academy and played in the 2004 WBCA High School All-America Game.

Following the 2011-12 season she obtained Hungarian citizenship and began competing for the Hungarian national team.

Her mother, Christine, was a hall of fame basketball player at St. Francis. Her father, Pat, was a multi-sport coach at Lincoln-Way Central High and passed away in 1994. She has siblings named Sam, Ryan and Jake.

She has played alongside point guard Courtney Vandersloot in Chicago.

Allie Quigley Is A Member Of