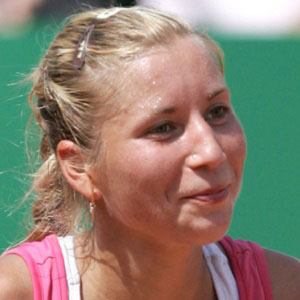 Ukrainian tennis player who won the women's doubles tournament at the 2008 Australian Open alongside her younger sister Kateryna Bondarenko. Among her other notable victories is a win over former world number one Jelena Jankovic at the 2010 Australian Open.

She was born in Kryvyi Rih, Ukrainian SSR and began competing on the pro tour in 1999, when she was 14 years old.

She and her sister Kateryna became the first pair of sisters to win the women's doubles title at the Australian Open since Venus Williams and Serena Williams.

She married her coach Nikolay Dyachok in 2010. Her older sister Valeria Bondarenko was also a professional tennis player.

She defeated Israel's Shahar Pe'er in the final of the 2010 Moorilla Hobart International.

Alona Bondarenko Is A Member Of