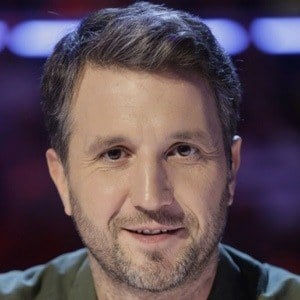 Television presenter known for his appearance on the ProTV series Trademarks and later the popular reality competition Romania's Got Talent.

At seventeen, he began selling newspapers. However, he broke from his journalistic and entertainment tendencies to study mathematics at the University of Bucharest. However, he returned to his passion when he gained his first job a radio station.

After appearing on the ProFM series Fun Radio and Radio Costinești, he became the program director in 1996.

He and his wife Olivia Steer have two sons: Luca and David.

Both he and Stefan Banica Jr. are popular ProTV presenters in Romania.

Andi Moisescu Is A Member Of