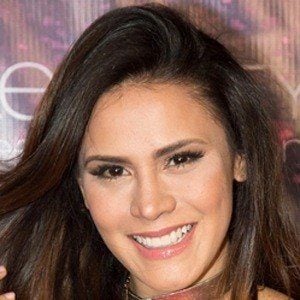 Colombian television personality who found fame as the host of UFC Now. She is also known for her very popular Instagram account, where her selfies and comedy sketches have earned her over 6 million followers. She also shares vlogs on her family's web group, The Royalty Family.

She moved from Colombia to the United States to chase her dream of making it in the entertainment business.

She served as the host of the game show Estrella TV Presenta: Esto es Guerra for its only season.

She has a son who is known on social media as Ferran The Fashion King. She's featured her husband Ali, who's known as 4kpapi, on her social media. They welcomed a son named Milan in June 2020. She and Ali married in November 2021.

She has made Instagram videos with several social media stars including King Bach and Danielle Cohn.

Andrea Espada Is A Member Of