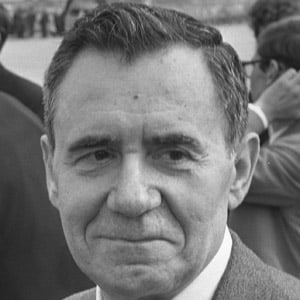 Remembered for his key role in Soviet foreign policy during the latter half of the Twentieth Century, this diplomat served as Minister of Foreign Affairs and Soviet Ambassador to Great Britain. During the Cuban Missile Crisis, he was instrumental in bringing about agreements that limited arms proliferation.

During the early 1920s, he held an executive position within his local chapter of the Komsomol (a league of young Communists in support of Vladimir Lenin). A decade later, he joined the Communist Party of the Soviet Union.

He taught courses on United States economics at the Soviet Academy of Sciences.

His marriage to Lydia Dmitrievna Grinevich resulted in a daughter named Emilia and a son named Anatoly.

In 1988, attended by Mikhail Gorbachev and other Soviet leaders, Gromyko announced his retirement as Foreign Minister after having served for nearly three decades.

Andrei Gromyko Is A Member Of