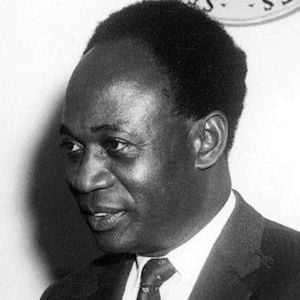 The first President of Ghana and it's first Prime Minister who helped unify the four territories of the Gold Coast and oversaw the nation's independence from British colonial rule in 1957. His government was overthrown in a military coup in 1966.

He worked as a teacher at various schools in the Gold Coast after obtaining a Master of Science degree at the University of Pennsylvania.

He was awarded the Lenin Peace Prize by the Soviet Union in 1963, which was suiting because he considered himself the black Lenin.

He had two kids, Samia and Gamal Nkrumah, with his wife Fathia Nkrumah.

While he was leader he met with several leaders around the world, such as John F. Kennedy.

Kwame Nkrumah Is A Member Of