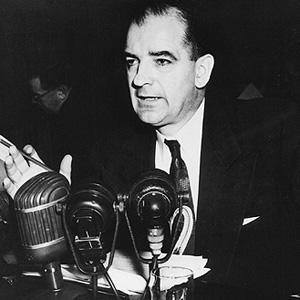 Republican U.S. Senator from the state of Wisconsin who took advantage of Cold War tensions to bring about Communist witch hunts, which destroyed many people's lives. He first rose to fame after an infamous 1950 speech in which he claimed to have a list of members of the Communist Party who were working in the State Department.

He left middle school briefly at age fourteen to assist his family's farm.

After the activities of his House of Un-American Activities lost popularity the Senate voted to censure him.

He married a researcher, Jean Kerr, in 1953; the couple adopted a daughter together.

He made several accusations of Communist infiltration into the government of Harry S. Truman.

Senator Joseph McCarthy Is A Member Of