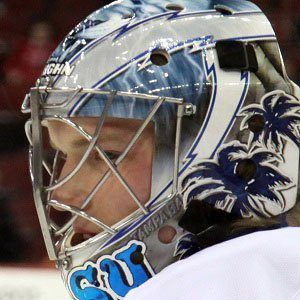 NHL goaltender who was selected 19th overall in the 2012 draft by the Tampa Bay Lightning. He made his NHL debut with the Lightning in December 2014 and he won the Vezina Trophy in 2019.

He had a standout junior hockey career with Tolpar Ufa of Russia's MHL from 2010 to 2013. He then played professionally for Salavat Yulaev Ufa in the KHL for two seasons before joining the Syracuse Crunch, the AHL affiliate of the Lightning.

He helped Russia win the 2014 IIHF World Championship and was awarded the Order of Honour by the Russian Federation after his team's triumph.

He was born in Tyumen, Russia.

His first NHL playoff win came when he replaced Ben Bishop twice in the third period of Game 2 of the Stanley Cup Finals against the Chicago Blackhawks.

Andrei Vasilevskiy Is A Member Of