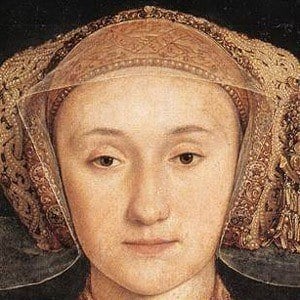 Remembered as the fourth bride of King Henry VIII, this German-born Queen of England ruled for only six months during 1540. Her unconsummated marriage to Henry VIII was annulled in July of that year.

When she was just eleven years old, it was decided that she would marry Francis, the son of the Duke of Lorraine. Several years later, however, the arrangement was broken.

Henry VIII commissioned artist Hans Holbein the Younger to paint her portrait, along with that of her sister Amalia, so that he could choose, based on appearance, which young noblewoman would become his wife.

She grew up in North Rhine-Westphalia, Germany, as the daughter of Duke John III and Duchess Maria.

Before marrying Anne of Cleves, Henry VIII had already had three wives: Catherine Of Aragon, Anne Boleyn, and Jane Seymour. When his marriage to Anne of Cleves ended, he wed Catherine Howard, followed by Catherine Parr.

Anne Of Cleves Is A Member Of