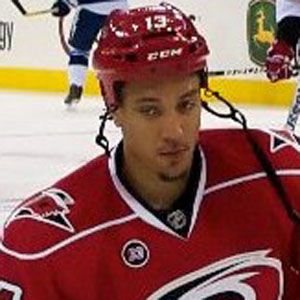 Canadian-Jamaican NHL right winger who began his career with the Florida Panthers in 2005. He then went on to play for the Atlanta Thrashers and Carolina Hurricanes.

He was a U18 World Junior Champion with Canada's national team in 2003.

He won a gold medal at the World Junior Championships in 2005.

He moved from Jamaica to Canada with his six younger siblings in 1974.

He shared the ice with Cam Ward on the Carolina Hurricanes for the 2011-2012 NHL season.

Anthony Stewart Is A Member Of