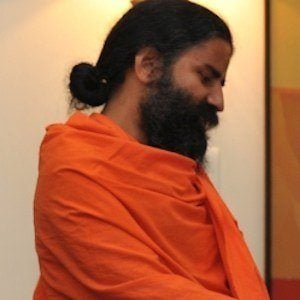 Yoga teacher and activist renowned for popularizing yoga throughout India through his mass yoga camps. He went on to found the Patanjali Group of Institutions and has become an advocate against corruption in the Indian government.

He studied Indian scripture, sanskrit, and yoga before he became a sanyasi, adopting the named Baba Ramdev. He spent many of his early years offering free yoga training to local villagers.

In 2003, he was given his televised yoga slot on Aastha TV and his teachings have since been distributed on YouTube on the Baba Ramdev Yoga channel.

He was born Ramkrishna Yadav to Ram Yadav and Gulabo Devi in Haryana, India.

He has taught yoga to actors like Amitabh Bachchan and Shilpa Shetty.

Baba Ramdev Is A Member Of