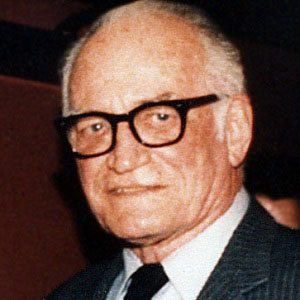 Notable as the son of U.S. Senator and 1964 Republican presidential nominee Barry Goldwater, he also had a successful political career, serving California's 20th and 27th districts in the United States House of Representatives during the 1970s and early 1980s.

After completing his high school education at Virginia's Staunton Military Academy, he briefly studied at the University of Colorado before ultimately graduating from Arizona State University. Before entering politics, he pursued careers in the business and financial sectors.

While serving in Congress, he was one of the authors of the famous Privacy Act of 1974.

Born in Scottsdale, Arizona, to Barry Goldwater and Margaret Johnson, he grew up with an older sister named Joanne and younger siblings named Michael and Peggy.

He endorsed the 1980 presidential campaign of his longtime friend and fellow Republican Ronald Reagan.

Barry Goldwater Jr. Is A Member Of