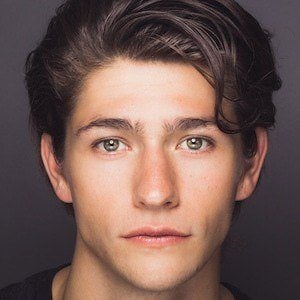 Freelance dancer, actor and model who starred as Damon in Lifetime's third installment of the Center Stage franchise. As a dancer he has worked for such prestigious artists as Lar Lubovitch, Pontus Lidberg, Lindsay Nelko, and Emily Schoen. He is well known for having appeared on the 2020 series Tiny Pretty Things.

He attended high school at Denver School of the Arts, and trained at The Academy of Colorado Ballet. He went on to attend The University of Arizona as a dance major, where he obtained a BFA in dance in May 2013.

He was born and raised in Denver, Colorado. He has also lived in Arizona and New York, and has traveled extensively throughout Europe. His girlfriend is jewelry designer Sophie Thoerner.

He was once featured as an extra for the Starz TV series Flesh and Bone, which stars actor Ben Daniels.

Barton Cowperthwaite Is A Member Of