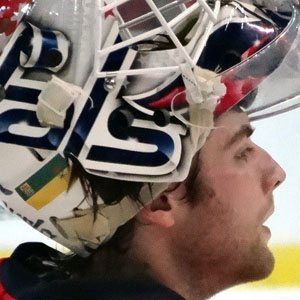 NHL goaltender who was selected 93rd overall by the Washington Capitals in the 2008 NHL Entry Draft. He won a Stanley Cup Championship with the Capitals in 2018.

He played his junior career with the WHL's Saskatoon Blades.

His goaltending helped the Capitals defeat the Boston Bruins in the first round of the 2012 playoffs.

He has a son named Benjamin and a daughter named Belle with Brandi Bodnar, whom he married in 2013.

He and Alexander Ovechkin became teammates when he was drafted by the Capitals.

Braden Holtby Is A Member Of