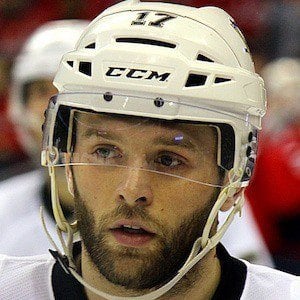 NHL winger who was drafted 80th overall by the Pittsburgh Penguins in 2010. He helped the team with the Stanley Cup in 2016, scoring both goals in their game 7 win over the Tampa Bay Lightning in the Eastern Conference Finals. He won his second cup with the team in 2017.

After being drafted by the Penguins, he enrolled at the University of Notre Dame. He played four seasons at the school before signing with Pittsburgh.

He's the eighth rookie in NHL history to score two goals in a game 7. He grew up playing with the US National Development Team.

He was born to Steve and Betsey Rust and has two siblings. His brother, Matt, played in the American Hockey League.

Teammate Sidney Crosby won the Conn Smythe Trophy as the most valuable player in the 2016 playoffs.

Bryan Rust Is A Member Of